In 1944, anyone could follow how the war was going in Europe by looking at a map. There was the front line, clearly drawn. The Germans were on one side, and the Allies on the other. As the line moved into Germany and toward Berlin, you could see who was winning. In the Pacific, you could see which islands were “ours,” and which were in the hands of the Japanese.

Vietnam wasn’t like that. The boundary between North and South meant little to those fighting the war, or to the folks back home. Not only was it the war with no front lines, it was the war in which Americans often didn’t know who the enemy was.

And it was more than that. It was a major turning point in our history. This war, unlike most of its predecessors, divided America. It changed Americans’ very concept of our country – not only our ideas of how we should interact with the rest of the world, but how we related to each other at home, and especially to our government.

For many thousands of South Carolinians, as usual, it meant military service – whether voluntary or by the draft.

The soldiers, sailors, marines and airmen who served in Southeast Asia have powerful stories to tell, and now, the South Carolina Confederate Relic Room and Military Museum helps tell them.

Throughout the exhibit, you will encounter such artifacts as: 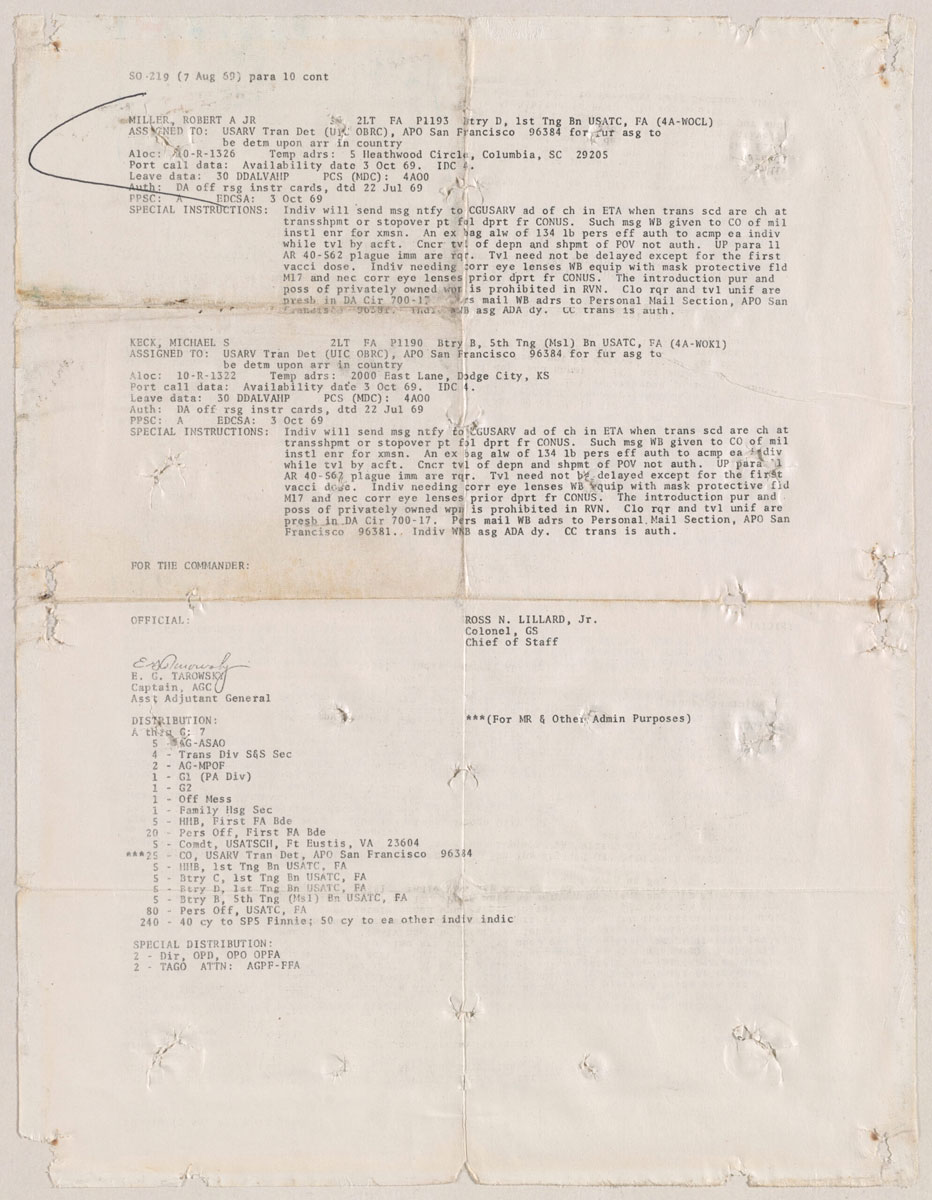 They were in his pocket when the mine went off. Lt. Miller was a forward artillery observer in IV Corps when he was hit by rifle fire and the shrapnel from the explosion. Metal shards struck him from his calves to his back. Both legs were severely damaged, particularly his left one, which he nearly lost. Along with the orders, he was carrying some calling cards and a photo of his girlfriend, who is now his wife. Those items were somewhat damaged, too. Only the orders remained unharmed.

This fluorescent display of sarcasm, so typical of the era, is located in the same part of the museum where classic First World War posters were displayed several years ago. All the posters from that earlier era reflected profound national pride in those who served. This poster shows what those who fought in Vietnam had to look forward to back home, where they were treated as – at best – chumps or victims for having donned their country’s uniform. These American heroes have carried this with them ever since. 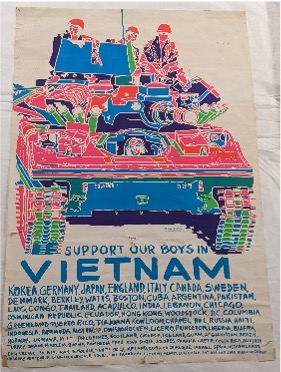 How does an automatic weapon work? You can get a better idea by looking at the insides of these two rifles, one of which was the primary weapon of U.S. forces, and the other the classic Russian weapon (actually in this case, a Chinese Type 56 copy of the Kalashnikov) that was so famously carried by the enemy.

Of all the South Carolinians who served in Vietnam, the most famous was Gen. William Westmoreland, the man in command over it all. He was one of the most controversial figures in our country when he commanded the U.S. effort from 1964-68. He later served as Army chief of staff, and ran unsuccessfully for governor of our state in 1974. We have the fatigues he wore in-country on display. 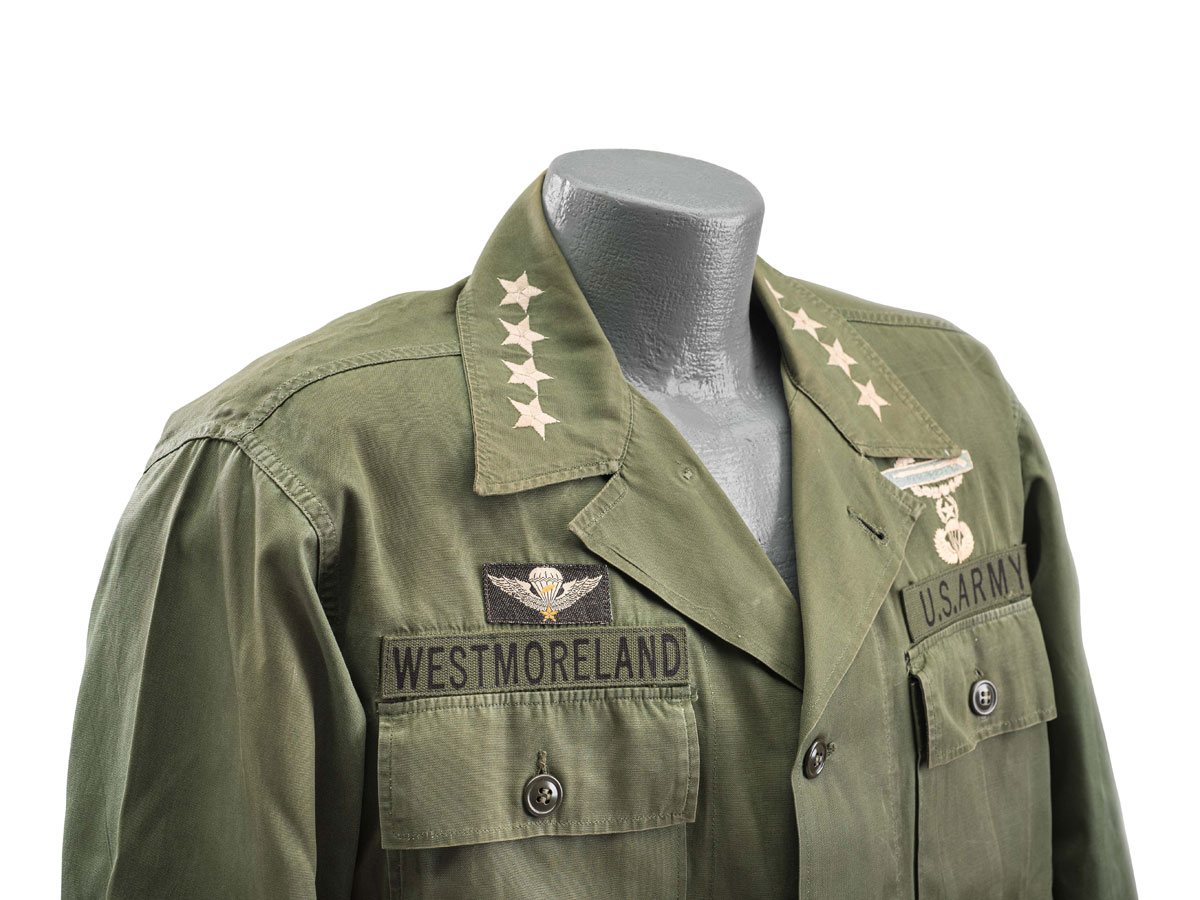 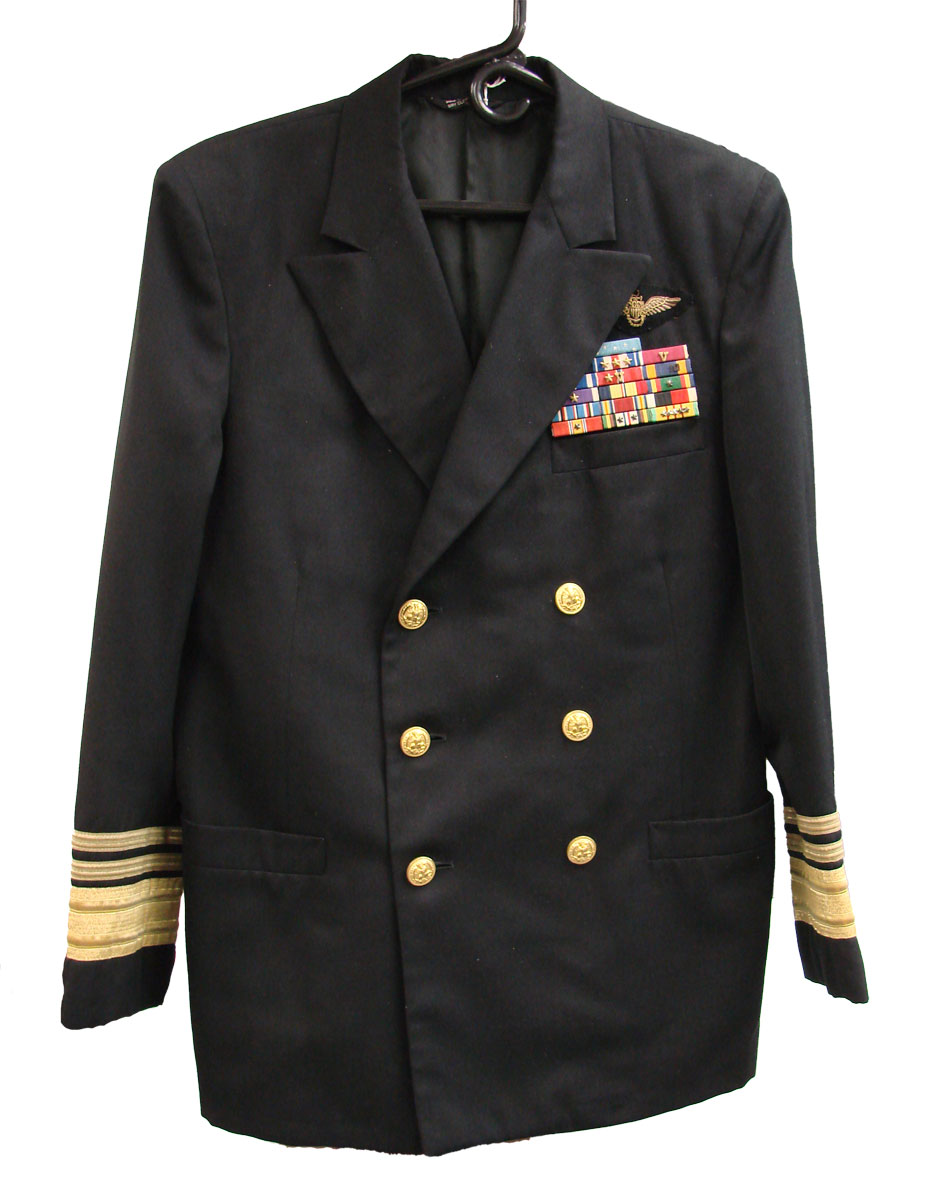 Vice Admiral James B. Stockdale was the highest-ranking officer at the POW camps in which he was held. He organized prisoner resistance, and was one of the few awarded the Medal of Honor for his faithful service during captivity. When the North Vietnamese tried to use Stockdale for propaganda, he cut his face with a razor to prevent it. He preferred death to collaboration. He was a hero among heroes. He would later be president of The Citadel, and Ross Perot’s running mate in 1992. His dress blue uniform is on display.

Steve Flaherty was born Yoshiaki Ushiroda in Japan in 1947 to a Japanese mother and an unknown American father who was serving during the postwar occupation of Japan. Adopted by Ron Flaherty during the Korean War, he would play football and baseball at Dentsville High School, where he was named “Most Popular” in his senior year. He gave up a baseball scholarship at Bryant College, deciding to join the Army and serve his country. A member of the storied 101st Airborne Division, he was killed in A Shau Valley in a fight that preceded the battle of Hamburger Hill. 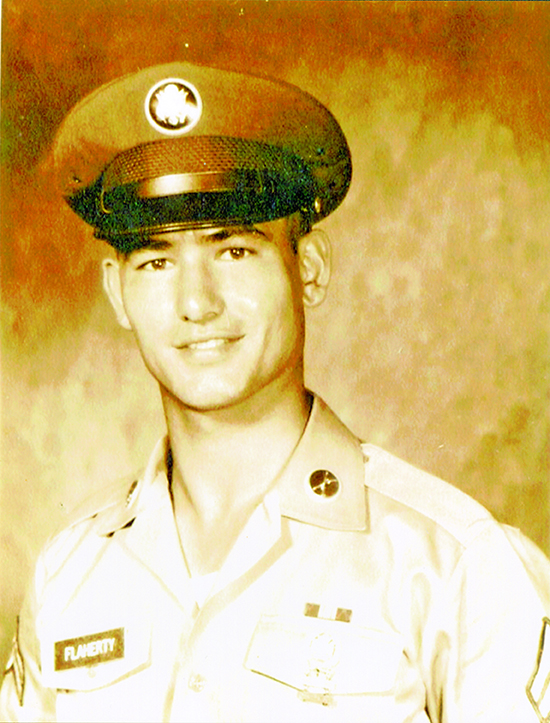 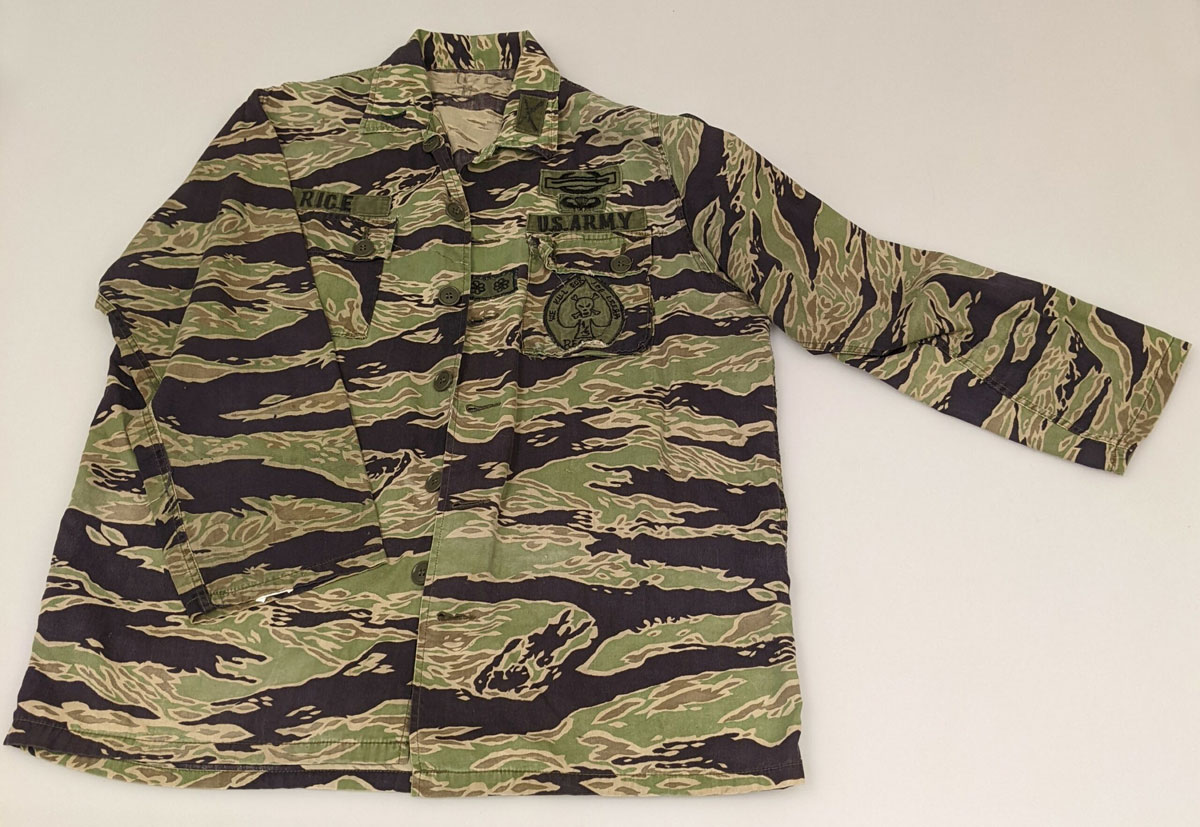 These “uniforms” were never officially approved for U.S. servicemen, but many chose to have them made in-country. The “We Kill for Ice Cream” patch is, of course, far from regulation. For the uninitiated, it refers to the fact that soldiers were sometimes rewarded with ice cream for enemy casualties. These were worn by Lt. Andy Rice, U.S. Army, on long-range reconnaissance patrols.

Chief Boatswain’s Mate James Elliott Williams, a Cherokee from South Carolina, received the Medal of Honor for his heroic actions of October 31, 1966. On that day, he was in command of two river patrol boats in the Mekong Delta that were fired upon by Viet Cong sampans. In the three-hour battle that followed, with the help of air support, he and his PBRs destroyed 50 sampans and killed 1,000 of the enemy. 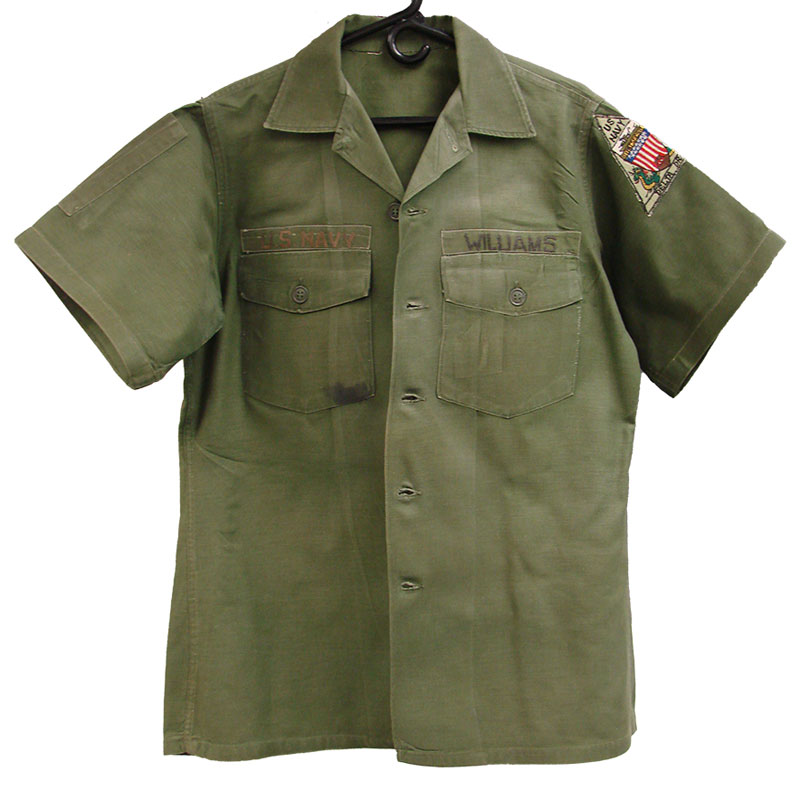 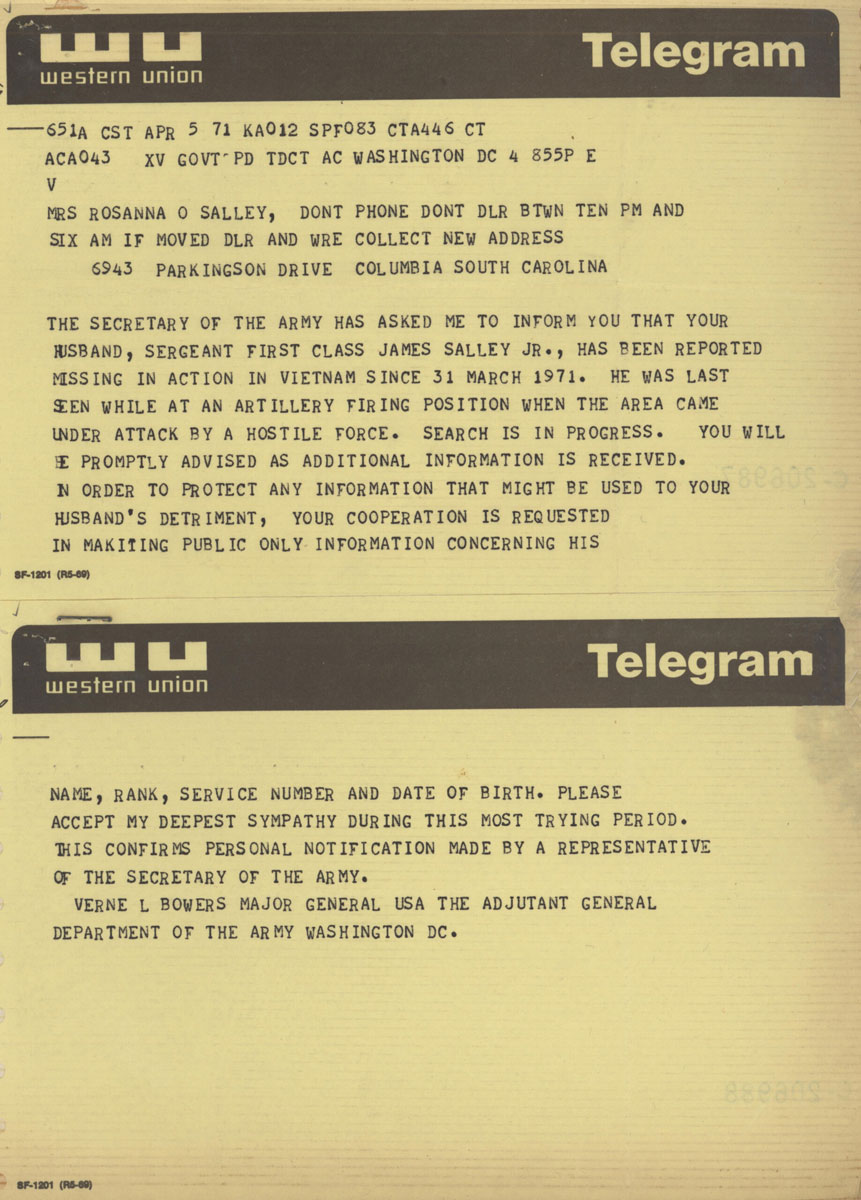 It was the thing that all loved ones back home dreaded with all their hearts, and this one came to Rosanna Salley back in South Carolina. It began, THE SECRETARY OF THE ARMY HAS ASKED ME TO INFORM YOU THAT YOUR HUSBAND, SERGEANT FIRST CLASS JAMES SALLEY JR., HAS BEEN REPORTED MISSING IN ACTION IN VIETNAM SINCE 31 MARCH 1971. He was never found, and never came home.

Plan your visit to the Relic Room today.
Get More Info
Copyright 2022 SC in Vietnam. All rights reserved.